Stop 1 out of Paris: Vigneulles-lès-Hattonchâtel

We left Adrien's apartment in the great 10th arrondissement and dragged our unwilling suitcases to the Gare du Nord, to take the RER to the airport. Apart from a non-stopping lift that forced us to carry the overweights down a flight of stairs, all was smooth ... and we eventually (with some misdirections) rendezvoused (as they say) with the TT shuttle and collected our white Renault Scenic.

Off we went, with Jane, our trusty electronic guide taking us along non-toll routes towards France's north-east. We were to arrive and check-in at out first stop, a B&B, after 5 pm, so the slow route of backroads was ideal. It also enabled us to see villages, cornfields, expanses of wheat and mysterious twig-like crops. Nothing will be explained.

The area is the Meuse, between Verdun and Metz. People come there to visit WW1 battlefields, but not us. We came for a lovely B&B ... and because Barry Jones told us that Metz Cathedral has the largest expanse of stained glass in ... what ... the world?  Europe?  the Meuse?  Metz?  Somewhere at least.

We stayed in the middle renovated third of a chateau in the lower village of Vigneulles-lès- Hattonchâtel (VLH from now on), with the older (apparently) village of Hattonchâtel on the ridge above it.  The B&B, La Renommière, was beautifully structured and furnished, with great hosts; there was a lounge and breakfast room on the (relatively) ground floor, bedrooms on the second floor, with lots of practice climbing wooden stairs. A terrace at the back for breakfast; an extensive garden and small swimming pool. Our room was itself a two-level suite, with sitting area and large bedroom, and a steep wooden staircase (!) leading to an immense U-shaped bathroom, featuring a spa (with under-water lights and built-in music) that we didn't use, a shower with multiple settings and jets that we did, and double glass wash basins. 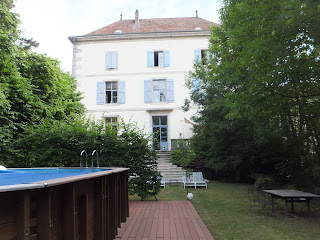 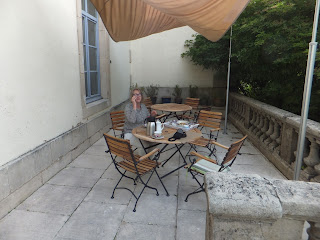 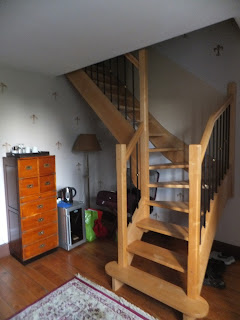 We ate at a small restaurant behind the B&B: pleasant and a light meal.

The next morning, after breakfast, we drove up to the upper village, wandered into the church (open) and past the chateau (closed), and then drove to the fortified church at Woël (closed) and onwards to Metz. 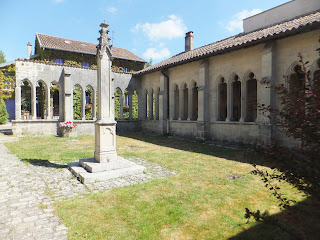 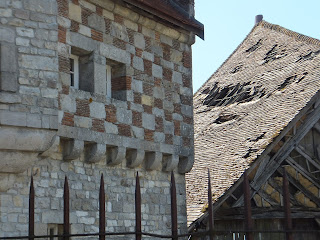 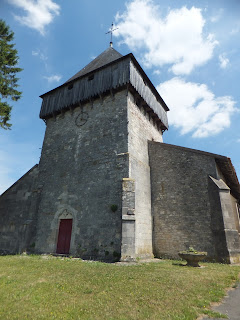 Several times round the northern suburbs until Jane was cowed into submission, parked on the outskirts of the old town, and walked into the centre. In the Cathedral, congregation and celebrants were practising something ... maybe the 3 pm mass.  Yep - there is a lot of stained glass, but the verticality of the gothic made it hard to really appreciate, and we thought we preferred Chartres. 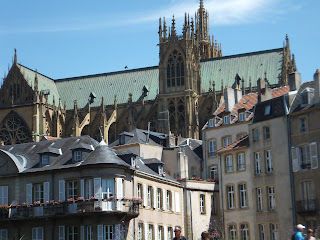 Wandered a little more, and then decided to do what we normally do ... take the local tourist train ... you know, those little daggy white or yellow or red or blue sets of carriages that trundle around the streets and give you a  guided commentary of who lived where, when it was built, what function it used to have, what it's used for now, and who just needs a new couch. 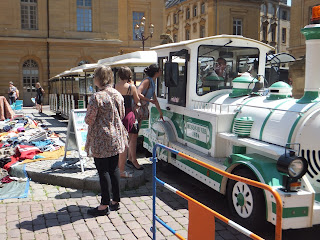 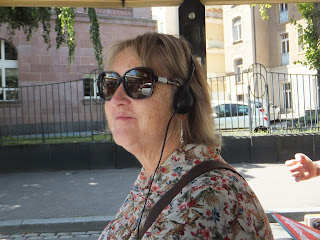 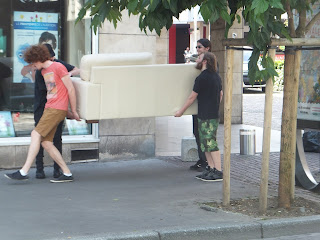 Great fun ... and we drove past our car in the parking area at one stage to check that it was OK ... and that we remembered where we'd left it.  (We'll see how many of these essential train experiences we can accumulate on this trip.)

Back to VLH ... and eventually to another light dinner in the same restaurant ... ruined by adding to the earlier over-indulgence of a banana split, by some eminently moderate sorbets!

Roger
Posted by Roger Holdsworth at 10:51