And so we continue haltingly southwards, towards the end of this trip.  Haltingly, because we'd planned to stop three more times before we board the plane for the final southwards leg.

But also haltingly because we are meeting some significant traffic chaos as we go, and we've sat motionless in traffic jams twice so far. We've already written in a previous post about the delays on the motorway around the border between Denmark and Germany. And we met further delays on the A1 motorway, and then huge tailbacks in leaving it near Cologne on the next stage. These latter delays were less explicable, apart from reflecting the huge amount of traffic, the disruption caused by roadworks, and badly planned traffic management systems (so two really busy streams of traffic tried to cross each other at one motorway exit/entry).

But before those delays, and once we made it into Germany, we spent a pleasant two nights and one day in the little village of Osterby - near Eckernförde and Kiel. Though this was a commercial booking through booking.com, the apartment shared many of the personal characteristics with those we'd booked through Airbnb: it was attached to someone's home; it was a large and well-equipped space (large lounge and bedroom, small kitchen within the central hall space, good bathroom; it was lovingly cared for; we were greeted as friends and had great chats with the host. It was a really good place to stay ... and quiet after big cities.

We went into Eckernförde to eat - first at a Greek restaurant (monstrously huge platters of meat and calamari and mezzes that we couldn't come close to finishing) and then at a Chinese buffet place. The town seemed pleasant (on a couple of quick drive-throughs), on the water (so we looked out over harbour lights from the Greek restaurant) and with some interesting buildings. Osterby itself is very small, charming and green, with a small supermarket ... and that's about it. It has welcomed at least one group of young Syrian refugees, who are settled near our host.

On our one full day there, with chill but clear weather, we drove into nearby Schleswig (itself with some historic sites) specifically to see the Viking museum and houses of Haithebu (or Hedeby). This includes the Dannewerk, a system of Danish fortifications or linear defensive earthworks across the neck of the Cimbrian peninsula, which was initiated by the Danes in the Nordic Iron Age before 500 AD (Wikipedia) - and here serves to defend a small town. We'd not previously read anything about this, and certainly hadn't planned to stay here because of it - the location of this stop was entirely based on distances that we needed to travel ... and on 'maybe there's something interesting to do for the day' - but in simply googling around the area, this popped up and led us to web references.  Maybe it would be interesting.

So it turned out.

Our visit to Hedeby took much of the day. It started with the museum, which featured a section of a Viking ship that sank just off this coast, and many of the finds associated with it: carvings, jewellery, storage bottles ... The museum also then went on to explain the trading routes, and the various crafts associated with the settlement. 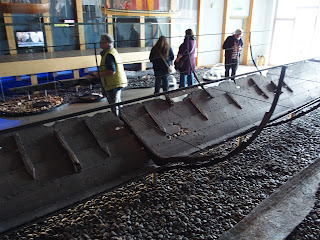 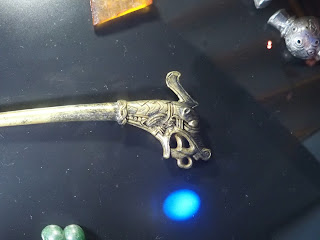 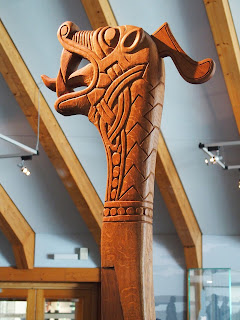 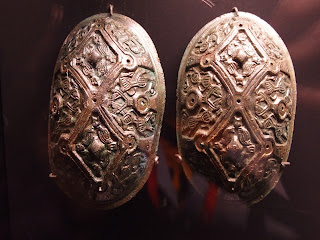 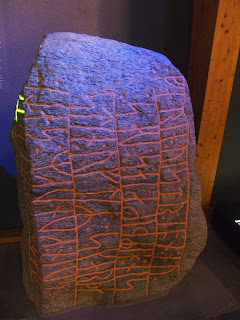 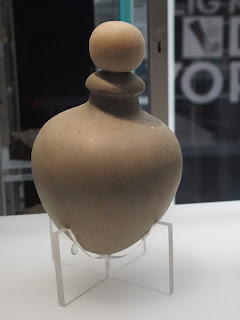 Hedeby was an important walled trading port, and a distribution centre for goods - and much of this is on display, along with interpretations of the crafts, jewellery etc from the area. It's a relatively new museum, well curated and leading into the large room with huge windows framing the coast, and containing both the rescued boat timbers and reconstructions (full size) of what it might have been like: 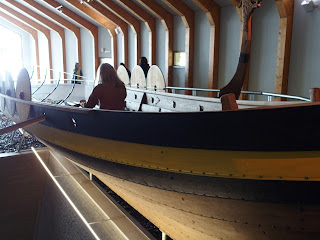 The audio-guide for the museum (always useful) continues in the outdoor area, leading us via a path through the woods: 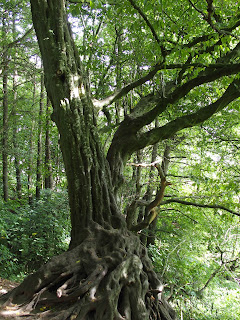 to the defensive earthworks - the raised bank around the town that would have been topped by wooden palisades. And beyond this, part of the settlement of Hedeby has been reconstructed in a group of wattle and daub and thatched huts. 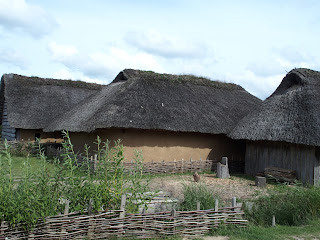 There were several school groups doing tours here, and some introductions were offered to the uses of these huts: meeting place, wood-worker, merchant etc. 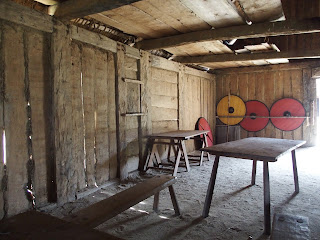 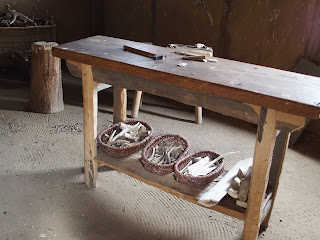 Finally, there's a reconstructed jetty, which would have been the centre of the original settlement, and the place where the ship that we'd seen in the museum, sank. 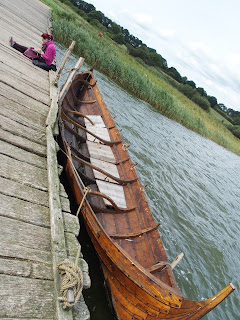 All of this has been reconstructed pretty much on the exact location where there was archeological evidence for the town. Perhaps this was the final bit of our Viking observations - and Pat is pulling some of this together in a separate overview blog entry.

So back to our apartment, repacking (into another new small bag in Copenhagen) - and haltingly onwards.
Posted by Roger Holdsworth at 00:05