Well, we could see some reason for earlier delays on the motorway, but this bewildered us. As we approached the very general area of Cologne (well, even the large urban/industrial agglomerations to the north), our GPS warned of delays ahead. When these warning blew out to predictions of 20 minutes stationary in traffic, and the GPS (note, we're not anthropomorphising Jane any more!) offered to find us an alternative and faster route, we acceded. Was this a mistake?  Well, it involved heading off the motorway into a small city, with traffic snarl-ups there ... maybe 2 minutes faster, said the GPS, but not really worth it because of the city hassles and more difficult driving!

So, when a second delay was predicted really near to Cologne, we opted to stay on the motorway. And the traffic slowed and stopped. We sat in a three-lane traffic jam that occasionally inched forward ... for over an hour. Finally, there was absolutely no movement and we were jammed into the right-hand lane between huge transports. There seemed to be huge queues at the exits that we had previously passed (slowly). 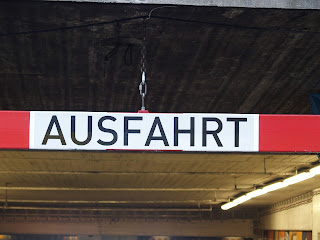 We edged out from the lane into crawling traffic ... at least this crawled.  And slowly slowly progressed. Finally our exit appeared - and the right-hand lane was still stationary, choked with transports. Like others, we edged across and pushed into the stream that was dripping off the motorway, crossing another stream of traffic trying to join the motorway (at least some of the problem) and then crawling round onto another packed cross-town motorway ... slowly, slowly.  But it slowly eased, and we managed to get into the appropriate suburban streets and to our accommodation ... but even here, the GPS located the start of the street only, and not the house, some distance further along.

But we got there, over 2 hours' later than we'd anticipated and had told out hosts. They were, however, pleasant and philosophical about it: that's just the way Cologne traffic is on a Friday afternoon!

The apartment is a cute earth/grass roofed building attached to our hosts' larger house. It is a substantial apartment: a large lounge up some steps, a kitchenette in the long entrance hallway, a large bedroom and bathroom, and even a small storage room. And a terrace outside - if the weather gets sunny. Just a really tight fit getting the car through the gateway. 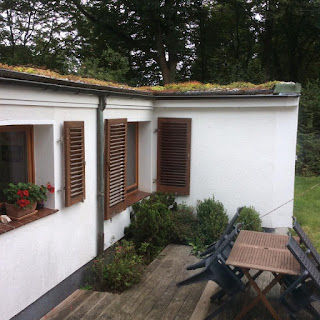 There's a wood across the road, and local sports fields and facilities next door ... a very quiet outer suburban location. However the apartment is relatively near both a tram and train line into central Cologne - and on to Bonn if we had wanted. It was a short walk into the village for shopping, restaurants and transport. Locally we ate at an Italian restaurant - really bad service and average food (we finished up complaining and almost walking out); and an Indian restaurant - quite the opposite: great food and very attentive and friendly service.

On the full day we had in the area, we went into Cologne by tram. This enabled us to see the tall age-blackened Cathedral: 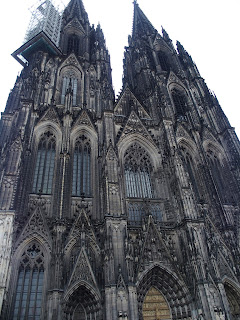 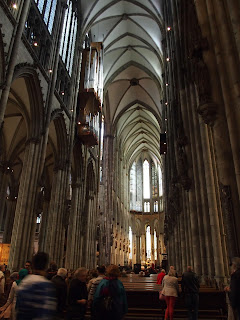 have some lunch, go on a boat trip along the Rhine (neatly bookending this German experience with the earlier boat-trip from Oberwesel) - which enabled us to see some great panoramas of old and new architecture from the river, as well as some strange sculptures (off one of the bridges): 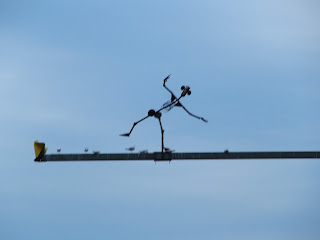 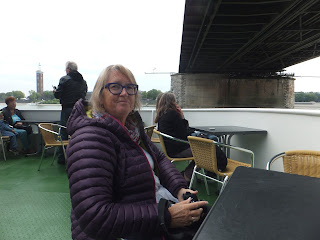 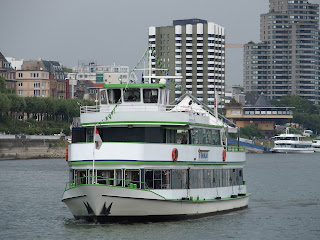 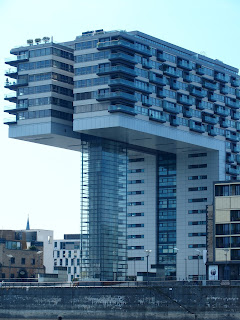 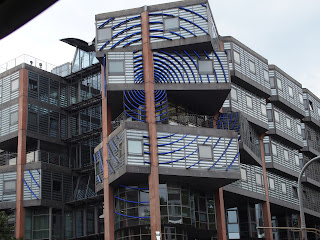 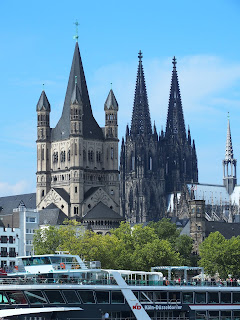 and also see the city from the little tourist train ... that bumped and rattled slowly around the cobblestone streets, battling with Cologne city traffic 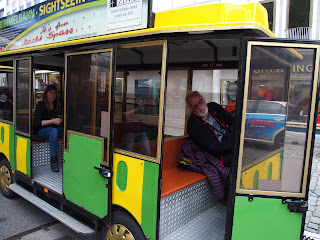 - and a couple of demonstrations ... one pro-refugee, and the other for the decriminalisation of marijuana (we think). 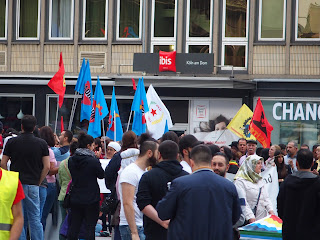 While we lazed on the boat in the sun (though it was not really hot), we also experienced the other extreme - for when we returned to our apartment, a huge thunder and rain storm swept over the area just as we headed off (by car this time) for our Indian meal.
Posted by Roger Holdsworth at 00:00