On the way from Copenhagen to Germany, we drove down the major A7 motorway. At one point during the trip, Jane (our sometimes trusty GPS navigatrix) suddenly informed us that the planned route was blocked. Did we want her to recalculate the route to Germany? Previously when this had happened, we'd found she was responding to a minor deviation - and so we instructed her to ignore it.

Wrong ... but this decision did lead to some dramatic observations.

As we approached the border between Denmark and Germany, and the 'blockage' got closer, traffic thickened and ground to a halt ... some 6 km from where Jane still said the road was blocked.  A 6 km tailback? We edged along, stopped, edged again, stopped more than edged ... for an hour or more.  What was it?  Roadworks? An accident?  Police cars and other official vehicles rocketed past in the emergency lane. And we also became aware than no traffic was now coming the other way along the motorway.

Eventually we got closer to an exit point and could see some of what was happening. A large group of people was walking towards us on the other side of the highway, with a few police with them (and many more following, along with some first-aid people). A chat with another motorist confirmed our observation: this was a group of Syrian refugees, mainly young men, who were attempting to walk to Copenhagen from Germany (and later we read: in an attempt to get to Sweden to join relatives etc). As a safety measure initially (though we're sure there were large political implications as well), the police had closed the motorway in both directions.

The group milled round, went off the motorway into the fields, then back onto the motorway again. There seemed to be discussions amongst them all the time about what to do - but they moved slowly northwards. The police seemed to be keeping a low-key presence: no riot gear, in fact no hats, low-identification uniforms... They seemed to be accompanying them, rather than be driving or obstructing them.

The following photo (credited to Jens Norgaad Larsen/TT) is from the on-line The Local DK, and was taken somewhere near where we saw the group - we think we saw the photographer chasing after the group along the road. 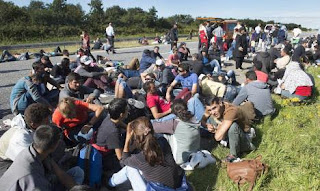 We had no information on how long this would last, whether the motorway would open again (there are still some hints that the closure lasted much longer), whether there were alternative border crossing points, whether they were open etc. Maybe there was information on local radio ... but we didn't know, and suspect that, even if so, we wouldn't have understood it.

We took the exit at the point where the motorway was blocked - but then had a choice: turn east or west?  West would take us 35 km or so to the other coast of Jutland, and then maybe across the border there; east seemed (on our road atlas, which lacked much detail) to provide the possibility of a closer crossing on the #170 road. So east it was - but all roads were now clogged with crawling traffic in both directions, including diversions from an intersecting motorway that had also been closed. Total chaos, with no information or directions provided.

Eventually, after another hour or so, the #170 led us across the border and, moving faster now, back onto the motorway south in Germany - and on to our destination.

All highly dramatic for us ... but how inconsequential in comparison to the drama, challenges and chaos in the lives of these refugees. Our lack of information, our disruption, our confusion, our uncertainties - these were all pale shadows of the lack of information, disruption, confusion, uncertainty that is daily facing these refugees. We had somewhere to sleep ... it was simply a matter of getting there. They had no certainties about where to sleep - or what future lives would eventuate.

But we also had the resources to take initiative to get out of the chaos and across the border ... again a pale shadow of the initiatives these people are taking ... not to be seen as powerless victims, but as people angry about the trauma and devastation and uncertainty ... and determined, by their actions, to do what they can to create futures for themselves - and here, to get somewhere that would welcome them.

Later, in the small German village where we are staying, the owner of the accommodation mentioned that five young Syrian men had been settled in this tiny village, in a community house next door ... and he and others welcomed them as 'lovely people'.

We crossed paths with desperation at least a couple of times today.

Posted by Roger Holdsworth at 00:04