... but the rain set in with a vengeance once we got to Copenhagen. Apparently it was really bad on the Friday as we drove down the coast and across the expensive and long toll bridge from Sweden (spectacular).  The weather was OK in Angelholm, a cute place where we stopped for lunch - and that attracts us to return at some stage...

But by Saturday, the rain was coming in in waves, so we broke out the quilted jackets and the umbrella and headed off for Copenhagen adventures. Luckily, this didn't last throughout the visit, and blue skies and sun (albeit with a biting wind, and then cool breezes) returned towards the end of our five days.

We headed straight to our Airbnb apartment in the area of Nørrebro. This was on the 3rd floor of a building, up wooden stairs, to a small, compact and lovely pied-à-terre. A bedroom, sitting room/kitchen and small bathroom - windy stairs down the back to a shared garden (that we didn't use). 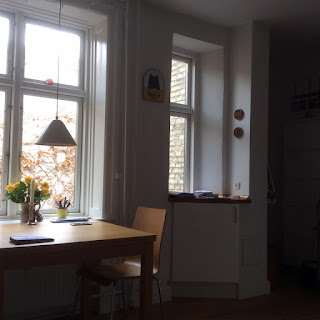 Our hosts were delightful and we shared so many interests and approaches. They welcomed us with a drink and pastries, so we chatted with them for a while before they headed off on their own inter-country break.  It was great to get a park right outside their front door and be guided to it by a phone call from the 3rd floor window!

The area is very interesting, emerging from a challenging past only in the last 12 months, and now with many small 'alternative' cafes, bakeries, restaurants etc. 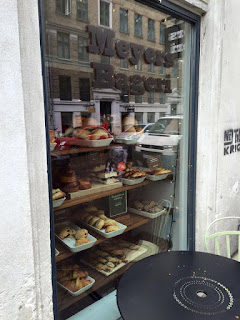 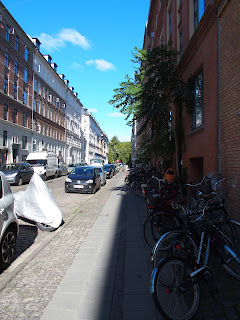 It was about a 30 minute walk to the centre of downtown, including a wander through the large cemetery at the end of the street: 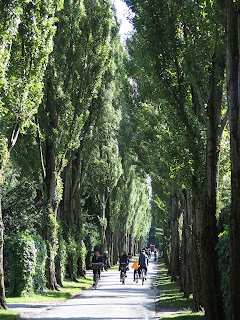 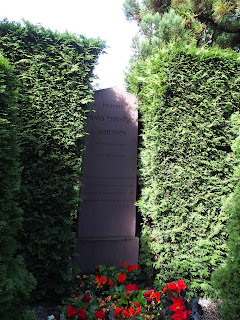 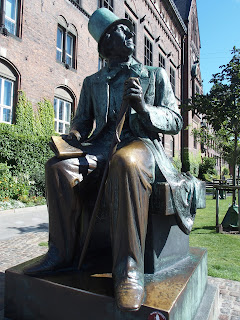 We were struck (sometimes almost literally) by the huge number of bicycles. Because the city is so flat, it's a logical way to get round, and there are dedicated and separated bike lanes everywhere. They are immensely proud of their 'green' credentials. But these bike lanes do cross pedestrian ways, and there is a 'hegemony of the bike' that can ignore traffic lights and pedestrian crossings. We learnt to look every way at every crossing (see a further blog for thoughts on this).  And there are many bicycle shops ... in every block.  Apparently, someone said, 1.5 bikes for every person in the city! 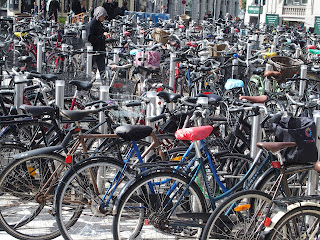 We walked a lot while we were in Copenhagen - down to the centre every day, and back ... and usually several ways around the centre. Sometimes it became a bit of a plod, especially in the rain and especially when we just wanted to get back to the apartment and dry off.  There were buses, but we were never far enough out to look at which ones went near us ...  But there were always distracting and attracting sights: 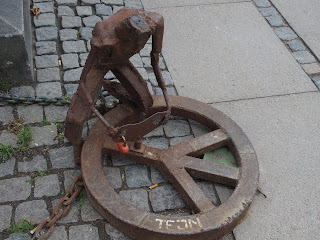 We did take the tourist open-top hop-on-hop-off bus. Partly this provides an orientation to the city, but also, with the top not so open, it provided a useful escape from the weather, while still enabling us to feel like we were doing something. We headed off on the first of three routes on the rainy Saturday, and then returned within the 24 hour period to take the other two routes that the company covered. The downside was that there are massive roadworks happening (and will be so for the next few years) as they extend an inner-city ring road, so the traffic chaos caused by that, plus the crowded streets of a Saturday and Sunday, meant that we seemed to sit motionless in traffic for longer than we should - or wait at bus-stops for the next one to arrive.  But we did see things, especially on the brighter Sunday: 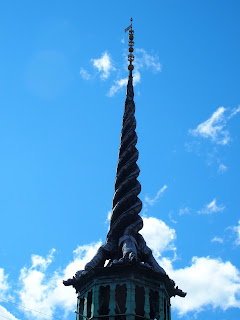 We also (with the weather improving) took a canal boat tour that ventured into a choppy larger stretch of water (think: the front passengers getting liberally sprayed ... we were further back on the advice of the driver). There are two main companies that do similar routes - and ours was the half-price one ... great, though the slight downside was that there was a plastic roof to the low boat that somewhat limited views. 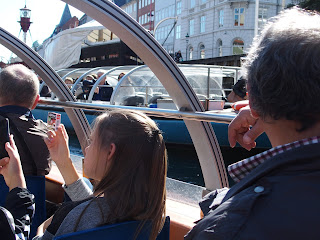 But we did get to see the major sights: such as the Little Mermaid (from a distance on the water): 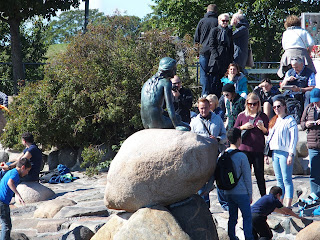 Christiana also from a distance (we're told that tourists get hassled for taking photos in the streets there), the main palaces and fort ... and so on.  And the allotments across the water, where people build little summer houses and garden.

The other form of tourist transport that we love, is the little toy train - totally daggy we know. But we saw one in passing at the weekend, returned and found it late on Monday and booked on. We sat there, the sole passengers to be, until the young driver bumped us ... he needed 6 people to make it viable, he said, and Monday, with new products in the stores, was a bad time.  Tomorrow, he said, as he refunded our money: come tomorrow and I'll give you a free trip.  So when we turned up on the Tuesday ... no sign of the train at all.  The tourist train that wasn't ... 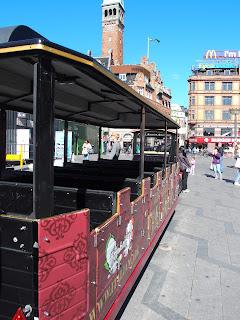 Other things to do and done: we went to the National Museum and browsed through the pre-history section, with great displays on preserved people within bogs. We think they could have made more of them ... in some respects, though these were fascinating finds and information, they were presented in a fairly 'old-fashioned' museum style ... small display cases of highly important finds, shown amongst many other things ...

We went to the Royal Palace, not for the state apartments etc, but for the archaeology of the underground areas ... the stories of the two times that the palace burnt down, and how this is reflected in the foundations.  That was a great wander in the gloom... 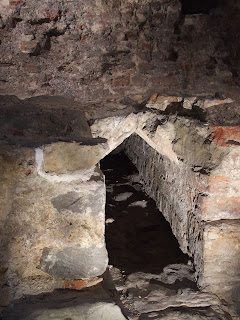 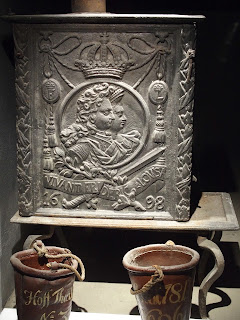 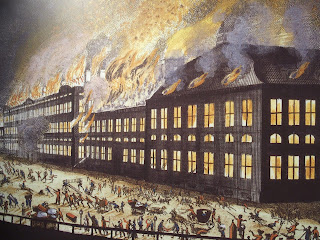 And, in crossing a bridge over the canal, we saw the underwater sculpture of the Merman and his Seven Sons ... but could only find six!! 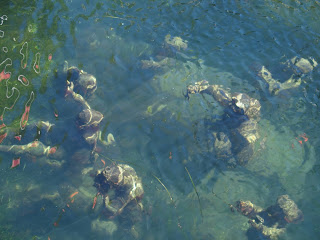 We met up with our physio, Tony and his partner Chris, for a drink and a chat about our separate travels; we dropped into a couple of CD shops (in one: 'where are the Danish folk CDs?' - 'oh, we specialise in world music, so we don't really have any Danish folk music ...'); we ate in Danish and Vietnamese (twice) restaurants, and got Chinese takeaways.

And it stopped raining and the sun came out ... eventually. 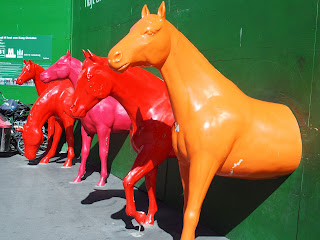 Posted by Roger Holdsworth at 23:52