Trondheim was the most northerly point of this trip - and, we calculated, the farthest north we've ever been. It was also our first stop in Norway, and a discovery of another pilgrimage route: St Olaf coming across the mountains from Sundsvall in Sweden, basically along the road we had driven, to christianise Norway. And get martyred for it. It's a pilgrimage route that parallels the idea of the Camino to Santiago de Compostela, with walking trails, refuges ,,, and its own symbology: 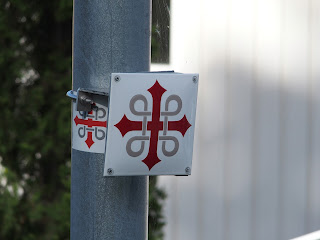 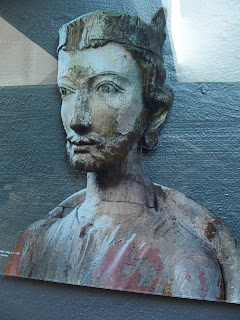 The road from Viskan started with rolling hills, but mountains loomed ahead, still with patches of snow in very late summer. We climbed higher and eventually, on a windswept high plain or pass, stopped for lunch at about the border. Then swept down into Trondheim.

We were staying in a lovely old wooden-housed quarter (Bakklandet) just across the river from the city centre: three rooms right on the street, giving us plenty of space to spread. But no room for the car, so it went into a commercial carpark along the same road. 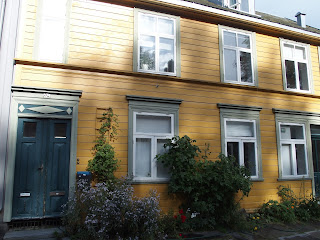 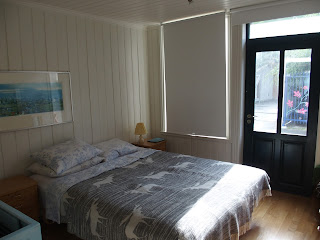 The area is very trendy now (ex-working class residences, with river-side warehouses nearby), with lots of cafes, and people wandering past to ooh and aah at the houses - but quiet at night. Part of the road in the area is being dug up - the perpetual European roadworks. 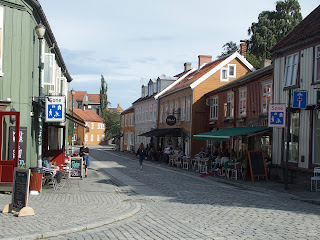 And an old bridge over the river to our quarter, from the warehouses: 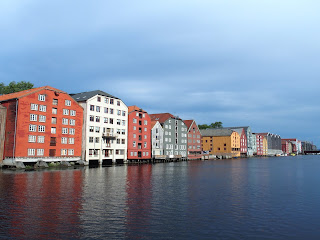 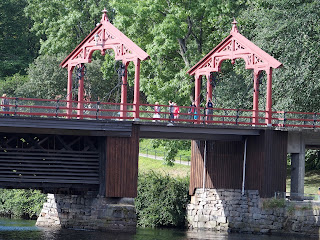 After settling in, we walked downtown for some cash and dinner at a recommended Thai restaurant - OK but, as with Norway generally, a little expensive. Then walked back to our apartment.

The next morning we climbed the hill near this area, going away from the river, to visit the Kristiansten Fort on the hilltop overlooking the town. It provided a good view, albeit a little obscured by trees; we wandered around it for a little while, but not tempted to visit its (17th C military) museum. 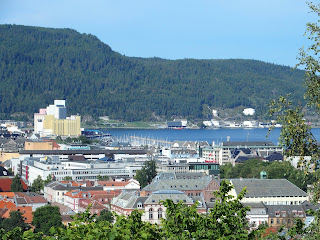 Of greater interest was the 'bike lift' up the hill; an embedded rail beside the road. You hop on your bike at the bottom, put one foot over the slot (on a sort of stirrup), press the button, and a cable-driven little platform pops up under your foot and pushes you up the hill.  At the top you take your foot off, and the platform vanishes back into the slot and returns to the bottom of the hill.  All free.  A great idea ... for Rucker's Hill! 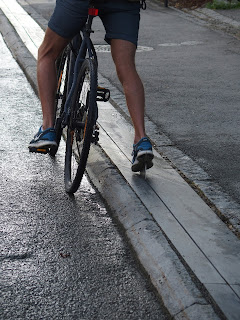 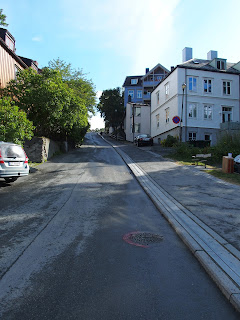 We walked over to the main tourist attraction of the town - the Nidaros Cathedral and its complex of buildings. This church was built over what was supposedly the site of St Olaf's grave (now taken to Belgium and lost), and has grown to be the northern-most Gothic Cathedral.  It has a great façade, but then you realise that its mostly reconstructed after demolitions and fires and rebuildings over the ages. But still impressive. 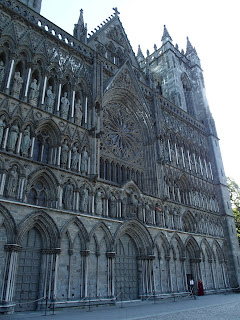 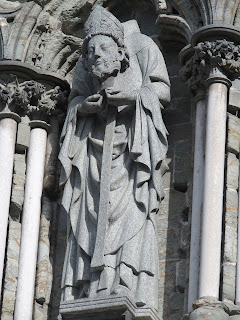 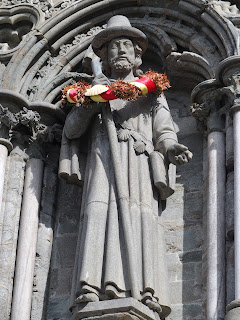 We did a guided tour of the Archbishop's Palace nearby (with a long lecture from Knut on Norwegian history), had some lunch, dropped in to see the Norwegian Crown Jewels in a dim underground room, and booked for the afternoon Cathedral tour in English. 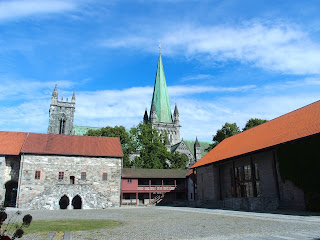 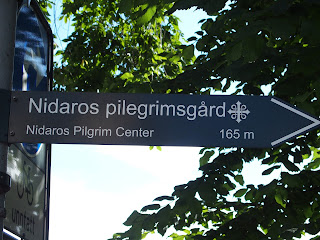 In the meantime, we wandered further down town to visit the basement ruins of an old church under a bank (plus an art installation - barely visible sculptures in an entirely blacked-out room - still not sure what that was all about).

Then back for the Cathedral Tour - Knut again and in full-length brown robes this time - for another explanation of pilgrimages to and at the church, and a bit of a wander around. No photos inside ... including of the mermaid that may have (amongst other symbols) defined sins. Into the crept and some gravestones.

There were a few other things we could have seen in Trondheim ... but this was enough. We left the Decorative Arts Museum, the Royal Residence (Stiftsgården), the Folkemuseum (an open air museum outside the city) and the Ringve music museum (also some 3 km outside town) for another visit.  It began to rain and we scurried up the street for a light classy meal ...
Posted by Roger Holdsworth at 13:05