First time in Germany for us!  (... if you ignore our rapid transit in 1988 from Austria to France, stopping only for petrol we think.)

So we made a slow ramble out of France via smaller roads and villages until we let Jane have her way and guide us into Oberwesel on the Rhein (Rhine). This is a picturesque small town between the higher lands and the river, whose town walls are still largely intact (only a road and a railway line separates all this from the water), and with the obligatory castle on the hill overlooking. 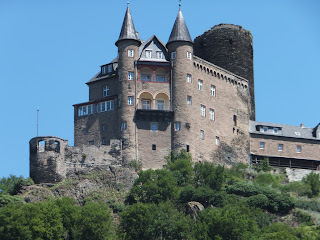 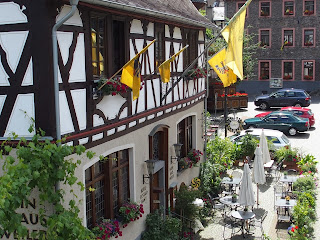 We stayed at the Hotel Restaurant Weinhaus Weiler, located in the Market Square, right next to the walls. We had a large room, looking out over the square. Parking just up the street in a carport.

After settling in, we headed off to walk around the city walls. Almost outside our hotel, we could climb up onto a section of these walls, and wander along them, into a small chapel, then down and alongside more walls, right round the town. Puff puff, since much of this is semi-vertical! Finally we got to the main church, with beautiful stonework and a little austere. Some drinks in the main street to restore us and back to the hotel.

Unfortunately, since it was a little out of season and Monday, the hotel restaurant was not open for dinner ... nor on the Tuesday!  So its famed meals were not tasted by us. In fact the whole town was ultra quiet. About the only place open for dinner (beyond a pizza place in the main street) was a wine bar, with a 'tasting' menu of meats and cheeses.  Why not!!  We learnt a lot about meat and cheese variations.

Next day, we finally got to send off the documentation for the car's environmental sticker. Then we walked up to the castle ... the difficult way we think ... puff puff again!  Then down to the river and a river cruise along to Boppard and back (about 2 hours each way).  Slow and hot.  Boppard was pleasant (and had a banana split), and it was interesting to see the small towns and castles along the way. But we think we were staying in the most interesting place on this stretch of the Rhein.

The river is less built up and more 'open' than we'd imagined it. Interesting ... not as many castles as perhaps we'd thought.  The river cruise?  Well, we'd suggest doing it one way and coming back by train.

Dinner ... well, we succumbed to pizza in the back courtyard of a small Sicilian restaurant (the owner was from between Palermo and Trapani), then back to the hotel ... enough walking....

In the morning, we made a quick detour to Urbar up on the higher land, overlooking the river, and to an view of Lorelei Rock to get some photos for Phil Hayward, before driving south along the river valley and onto the autobahns towards Bad Berka. 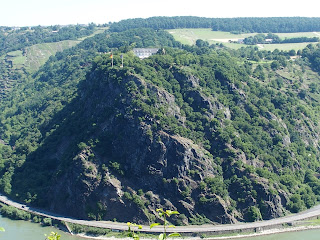 Posted by Roger Holdsworth at 09:35