Česky Krumlov is a relatively small town, about 180 km south of Prague. Like Prague, it has UNESCO World Heritage listing and is firmly in southern Bohemia. We drove slowly south, stopping at the town of Tábor for lunch in the handsome and huge main square. This was the core of the Hussite uprising in the 1400s. 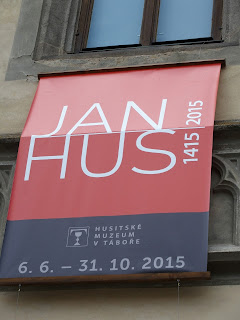 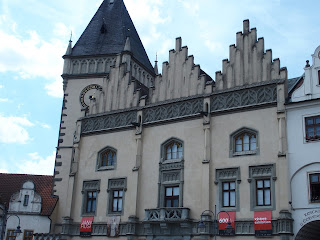 The town of Česky Krumlov (ČK from now on) is surrounded by hills and located in the sharp curves of a fast-flowing river: the same Vltava that flows through Prague. Our Pension Athanor in ČK was just out of the centre, on a ridge above the river. That meant it was out of the busy centre, with free parking provided on the street, but only about 10 minutes' walk right into the centre. It was a handsome old building, beautifully restored. 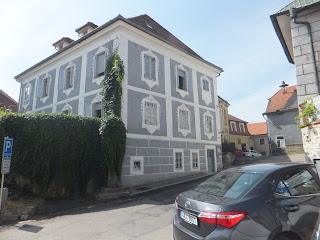 We had an attic room, unfortunately up flights of stairs (we're getting stronger with the luggage), but tucked away under the roofline on two levels ... a single step-up/down ran across the whole room. And it had air-conditioning! A bonus for hot weather. We could peer out through small dormer and sloping windows, over the town roofs on one side, and out to the hills on the other. Breakfast was in the beautiful cellar and was extensive! 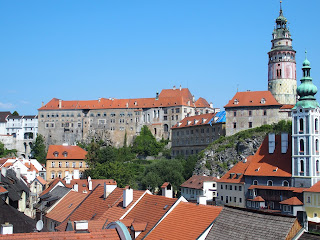 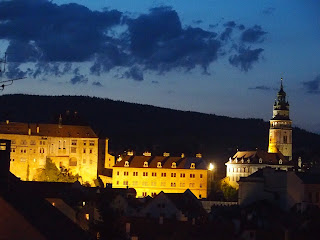 A castle, the second biggest in the Czech Republic, dominates the ridge on the far side of ČK, with a decorated baroque tower. The cityscape, between us and this castle, is well preserved, with many, many handsome houses and palaces. An audio tour from the tourist office introduced us to the town ... we thought 2 hours would be enough, but ran out of time, and really needed three to do it justice. 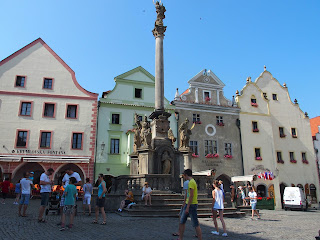 We also climbed up to the castle (twice or three times) and did tours of the Renaissance rooms (the Masquerade Hall was the highlight), and of the remarkable Rococo Theatre, where we could wander under the stage and see the restored (not reconstructed) mechanisms that moved scenery and lighting ... and try the sound effect machinery. 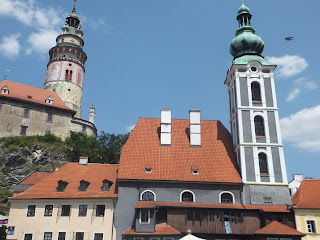 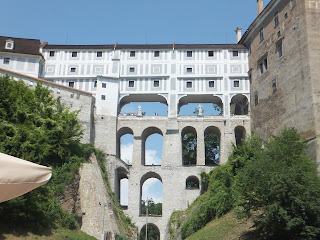 We also hauled our tiring bodies up the tower for a view over the town, and went into the cellars beneath the castle, which featured not only a multi-level maze of spaces, but a fun surrealistic art show, much of which seemed to be based around teeth palates and intestines.  Don't ask.

While there, we also visited the museum/gallery featuring the work of artist Egon Schiele, whose mother was born here ... and where he lived and worked for many years until he was run out of town for painting young female nudes, with local girls as his models. The gallery was a great space, with several other artists and photographers, some of them contemporaries of Schiele, on display. 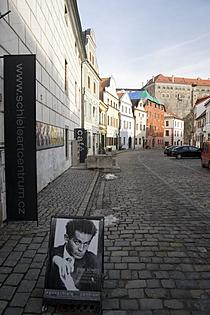 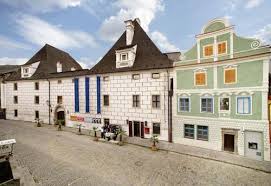 The overwhelming impression of ČK was, as with Prague, of massive tourism in-season. Our quarter was relatively quiet, but as soon as we got down the stairs and across the river into the old city, it was again shuffle and selfie time. Many seemed to come for the day (though every second house was a pension and/or restaurant) and it did quieten down after dinner. During the hot days, a strong focus of tourism was rafting and canoeing on the river. A couple of weirs broke the bend, and there were water chutes down which groups or couples shot, often screaming as they went. Those on the banks, in restaurants and cafes and ice-cream parlours shouted 'ahoy' frequently. There were queues of crafts - perhaps even hundreds of them - waiting to shoot the rapids ... they all vanished off somewhere downstream ... and we never found how they got round again ... maybe a gigantic Herzogian effort dragged the canoes and rubber dinghies over the ridge to try it all again. 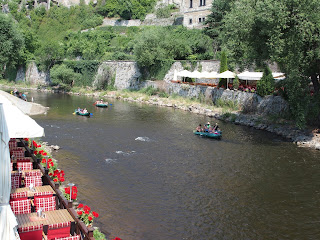 It would be a great place out of season too - quite enough to do over 2-3 days. There was an international classical music concert there at the time as well, with guests arriving in fleets of tinted-window cars and taxis ... and even, we think, the Japanese ambassador.
Posted by Roger Holdsworth at 10:40