The drive to Bad Berka was initially along the river, and then via the autobahns ... past Frankfurt (towers in the distance) and a petrol stop.  Bad Berka is just off the motorway (well, about 10 km off) and south of Weimar ... in what was East Germany.  This was about as close as we could get to Rudolstadt for accommodation during the festival. It turned out to be great choice too.  Bad Berka is a small town (well, larger than the village we thought it might be). The Pension Ilmhof is right in the centre of town, on the banks of the Ilm.

Out the back of the Pension is a small, 2-room holiday house (ferienhaus). This provided us with self-contained, self-catering accommodation, and also meant that we could leave and return at odd hours that suited the festival. It was well set up with reasonably sized rooms, in a pleasant large garden - space to eat outside under cover, and possibilities for doing and drying the washing! 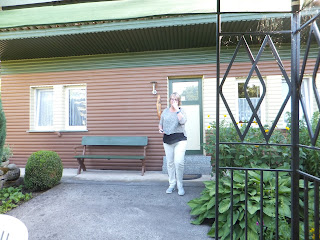 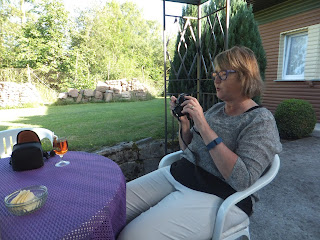 The draw-back:  no English.  And no wi-fi in the ferienhaus ... and not even in the main building, as they explained that it was kaput.  We think.

We stayed there for 6 nights. After arriving, we drove into Rudolstadt - about 30 minutes away. We'd heard that there were roadworks and wanted to check out the travel before the first day of the festival ... but all was OK.

Then back and a meal at the pleasant restaurant beside the river in town ... again, about the only place that seemed to be open apart from a kebab/pizza shop.  Oh, and we did some supermarket shopping for frühstuck.

More about the festival in the next post, but after the festival was over, we had decided to stay on a further day in Bad Berka, and used this for a leisurely visit to Weimar, just up the road. As well as being the location of the Weimar Republic (pre-Nazi era), it had earlier been the home of Goethe, Schiller and Liszt. We took a self-guided walking tour of the town ... little headphones with a touchscreen, and a dialogue between Goethe and Schiller.  Well done.  We interrupted it to go down a 'hole under the park', which was variously the drainage system for a castle's wine cellar, a mine for travertine and gravel, and bunkers during WW2.  A great display (only in German), a very friendly guide (who got in trouble from his boss for showing us round - there were also further official tours of the more extensive cave system) and an earthquake monitoring system ... which our guide showed us how to trigger by jumping nearby!

Back to the Bad Berka ferienhaus, where our environmental plakette had finally arrived (despite a postal strike and just in time) and dinner at the same restaurant.  It was still warm, though not as hot as Rudolstadt had been ... and there was a further evening lightning storm to keep us entertained ... in the absence of wifi and comprehensible TV.
Posted by Roger Holdsworth at 09:46