It seems strange and contradictory that we're in the land where Tycho Brahe is buried (we saw the body to prove it) ... and with Kepler and Copernicus to come ... and we're surrounded by something that attempts to refute all of their work!

These philosopher-scientists argued (with others like Galileo) about whether the earth or the sun was at the centre of the universe and, by direct parallel, whether therefore human beings were the centre of creation. Slowly science won ("yet still it moves") and we were no longer at the physical and metaphorical centre of everything, but in our real, insignificant place.

Yet, we've noticed that science is being defeated again. It is being burnt at the stake, like Jan Hus, but this time on the bonfire of solipsism. Everywhere we've been on this trip, it seems that people (not us I hasten to say) are taking 'selfies' by the thousand. We're surrounded by people propping in the middle of a pathway, next to some amazing but ignored scenery, holding out their phones/cameras/tablets and taking photos of themselves!

Sometimes the scenery itself and one's capacity to see (really see) it is obscured by the forest of selfie-sticks! (We totally agree with their re-naming as narcissticks! [Havrillay, G., 2015]) 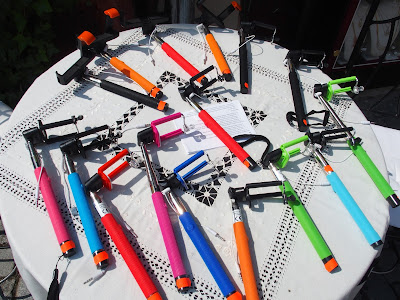 What is all this about?


Narcissism gone mad ....  The following comment on the wall of the Egon Schiele museum in Česky Krumlov: 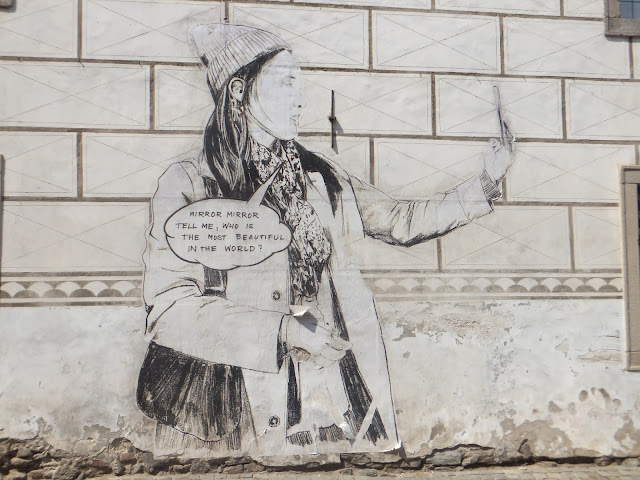 But I see something deeper and more sinister than narcissm here.

The world that these tourists journey through doesn't exist. It can only be created if they are in it - if they are there at the centre. Reality exists only in one's mind ... that's the essence of solipsism. And so, the experience of being here has no objective reality until one has simpered and posed and kissed the flowers and smiled into the lens ... and made sure that the world is made perfect (for oneself of course) through one's own perfected make-up.

The narcisstuck-up tourists deny Brahe, Copernicus, Kepler, Galileo et al. They ARE at the centre; the world revolves around them; they can stand anywhere, blocking anyone, walking into others, talking loudly, taking their spaces ...

They have the photos to prove it.
Posted by Roger Holdsworth at 10:45