This is a largish town, across the border from the Czech Republic and into Poland. It's a city on a river and delightful both for that vista, and for what its streets and squares and museums have to offer. We crossed into Poland via minor roads and a couple of stops: the small town of Kraliky as our final stop in the Czech Republic (for its pleasant market square) and then Klodzko, which turned out to be a larger centre across the border in Poland ... where we tried to stop, but were deterred by intense traffic and the lack of an easy park, so drove on.

In Wrocław, we'd booked at the WenderEDU Business Centre ... yep, a University conference centre!  When not booked out for conferences, they apparently operate as a small simple hotel, with rooms spread over the upper levels of a building on the river bank in the Cathedral Island area (Ostrów Tumski). (The building on the right in the picture below.) So our room (top floor in the white facade; window on the right) was large, simple, comfortable ... with a great view over the Odra River.  Unfortunately up three stories ... without a lift!  But a good breakfast provided and parking (paid for but reasonable) securely within the Centre's yard. 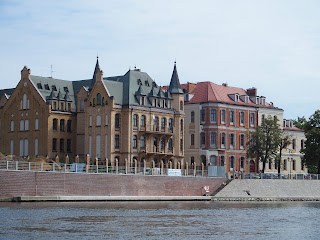 One of the particular sights we'd come to Wrocław to see was the Panorama of Racławice, a 360 degree painting of a 1794 battle in which a Polish peasant army defeated Russian forces. This is housed in a special circular building, right across the river from where we were staying ... an easy walk. 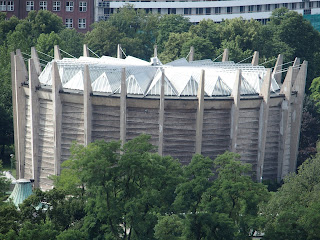 There are regular tours of it, with audio-guides in various languages. Because most of the tourists visiting at the time we saw it were Spanish, the broadcast description was for them, and English, Polish and other languages were via the headphones. You enter via an upwards spiral ramp, emerging in the centre of this vast painting ... 114m long and 15m high. It's a brilliant depiction, with sand and grass running right from the barriers and merging into the curved canvas, so there's an almost 3D effect. This is enhanced by some clever lighting, so the sun seems to come out and then go behind clouds ... and the scene lives! The description provides background, but then walks you through the essential parts of the painting, describing who the figures are and what they are doing. 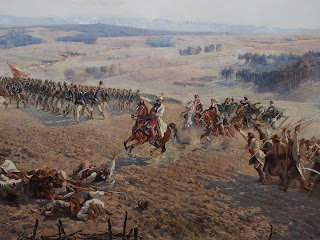 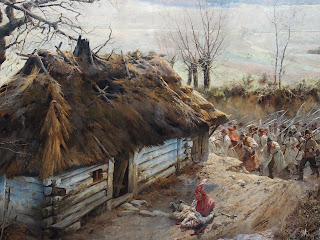 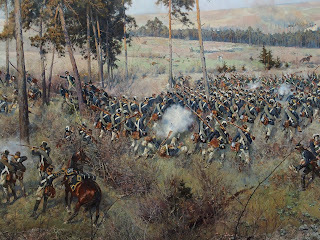 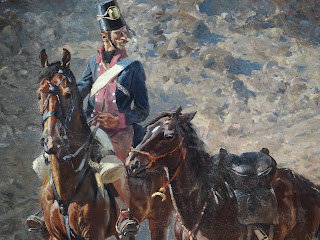 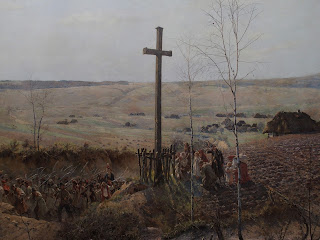 The ticket for the Panorama also includes a visit to the nearby National Museum, and here there are three floors of art from various areas. Some very interesting examples, including some modern local work, but we're a little art-weary at this point! 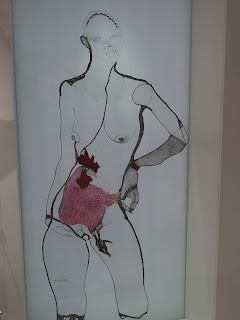 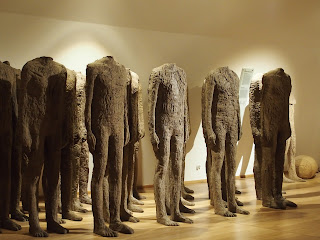 But the whole city (well, the old central part at least) has a beauty that rivals much of what we've seen so far in other cities. The Odra (river) provides a unifying and locating thread, with some great churches and cathedrals on the islands just to the north of the old centre. We could walk into town fairly easily, crossing several of the bridges along the way. 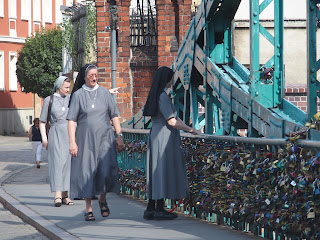 We also took an orienting trip on a small boat, which cruised through some of the smaller branches of the river, and looped along the main stretches. 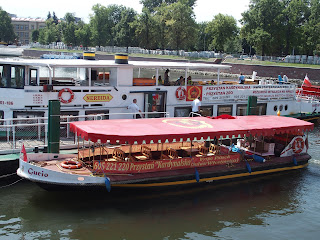 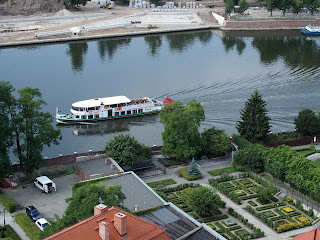 It was also useful to get an orientation to the city via one of the city tours, and here was a new phenomenon that we'd immediately seen around the streets: small golf buggies, with a limited passenger capacity, that quietly (electrically) bumped around the town.  So we did - and took a fairly expensive (by local standards we suspect) tour with a knowledgeable young women, through the old quarter, around the churches, out to the zoo etc. But we saw parts of the city that we maybe wouldn't have thought to visit and learned a little of its background - including the existence of an unexploded shell still embedded in one of the Cathedral's towers. 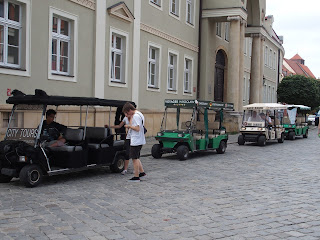 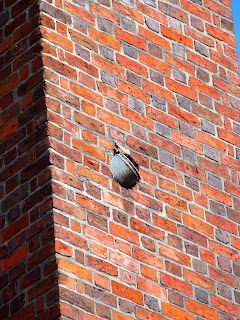 The city market square (Rynek) is Poland's second largest (after Kraków's), and is very attractive, with Gothic and baroque style facades. But a large set of buildings (themselves quite attractive) have been placed in the middle of the square, which sort of breaks up its impact. It's fine to have some fountains and plague columns, and even a town hall with astrological clock in the centre of the square, but here there are many buildings, with streets and lanes running through them. So the square can almost be reduced to four connected wide spaces, rather then having a homogeneous whole. The smaller towns, with their defined and uninterrupted squares, seem more pleasant. 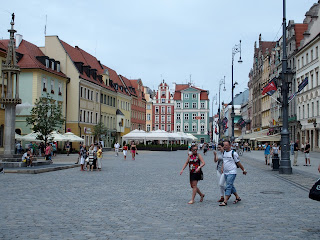 On one corner is the old Salt Market (Plac Solny), which is now a 24-hour flower market.

The other enticing aspect of the town is its gnomes. Arising from the Orange Alternative, as a symbol of resistance to censorship of dissent and graffiti, and now transformed and marketed as a symbol of the town, there are over 300 small brass gnomes scattered around the town, on the riverbank, in little alleys, very publicly in squares, and obscurely up lampposts etc. You can play 'Spot the Gnome' with a map from the Tourist Office ... we saw a few before we bought the map, but felt no inclination to be 'completist' about tracking down the other 290! 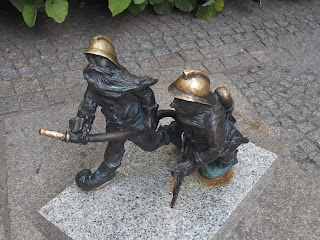 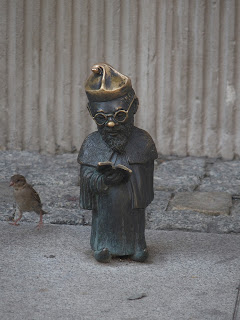 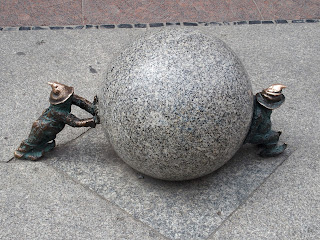 Another sculpture is further south of the old town, and is called Passage. It is across a fairly major street, on an ordinary corner, and consists of life-size figures who descend into broken pavement on one side of the road and emerge on the other. A great concept, and done really well. 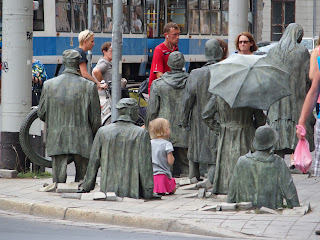 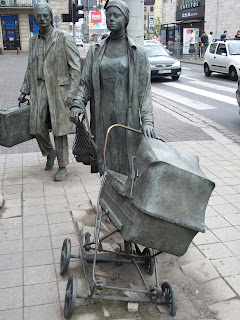 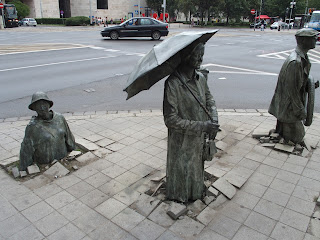 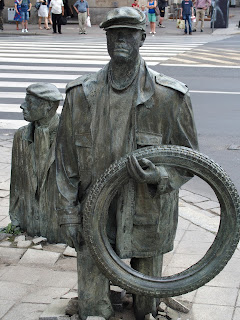 We also climbed to the top of one of the steeples of the Cathedral, aided by a lift for most of the journey, for a vertigo-inducing view over the town, and dropped in on the obligatory couple of churches including one that had a lower church for the peasants/workers and an upper church on top of this, for the nobles. 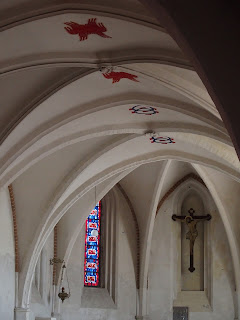 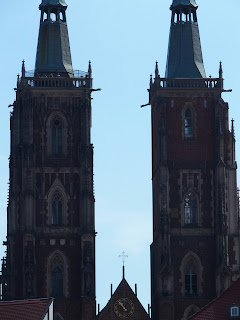 Ate at some interesting and enjoyable places ... a vegetarian Thai place literally through a hole in the city wall and up a tower; a modern marina with air-conditioned comfort (it was still very hot) overlooking the well-lit old university on the river; a Turkish kebab shop in the newer town; etc.

This is a most enjoyable city, larger than previous centres we'd visited, but easy to be in and get round. Add it to your list!
Posted by Roger Holdsworth at 10:27