This will be a bit of a disconnected set of impressions of our time in Berlin - which sort of mirrors how we feel about it. While it has been easy to be here, and there have been interesting things to see and do, as yet the city doesn't really 'hang together' for us. It's been about our apartment, our neighbourhood, our short excursions...


There are some places in which you stay where there is no room to put the luggage. Here, the apartment is so vast, we feel we're on the point of forgetting where we put the luggage.  There are corners of the rooms we haven't visited. 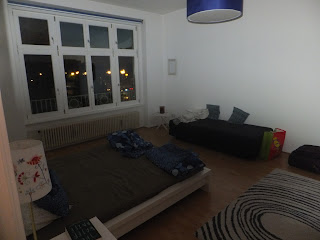 The Airbnb apartment is in the Frankfurter Tor - workers' housing constructed in the 1960s or 70s. These are very swish multi-storey blocks on the street, where Frankfurter Allee becomes Karl Marx Allee heading into the city.  We're on the 2nd floor, (with a lift!) above the monumental arcaded entrance, with a view west immediately to two rounded towers on the similar blocks on the opposite corner. 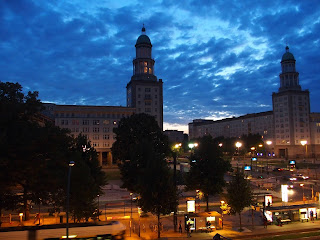 The apartment has an entrance hall larger than rooms we've stayed in, a good kitchen and then huge lounge and bed rooms. And a decent bathroom.  Everything very clean and useful; simply but well furnished. Double-glazing on the windows, which keeps out the noise, but can make it a little airless in the summer.  But the street noise is not too bad, and during the entertainment of nearby police raids the windows provided us with a great vantage point ... but more on that anon.

There is free parking in the large courtyard behind the building, which also contains the Pablo Neruda Library and a children's play area.


This is located in Friedrichshain, which is a fascinating, relaxed but lively area. It is well serviced by transport into the Mitte (U-bahn right under the building, M10 tram in front), four stops away. You can be in Alexanderplatz in 15 minutes.

There are also tons of restaurants in the main north-south and back streets; we've eaten Vietnamese, Thai, Kashmiri, Lebanese so far. They're all good food and friendly and very reasonably priced. We can walk to lunch or dinner in 10 minutes.

There's a big supermarket four blocks south (a 15 minute walk or three stops on the tram) and lots of little grocery stores on the street. Further south, the main road crosses the river (Spee) and just before then, on the banks, is a highly painted/grafittied section of The Wall ... very popular tourist destination. 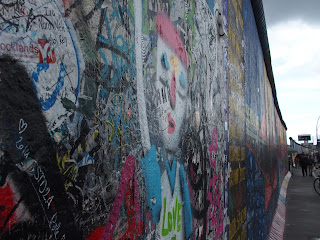 The only draw-back is that, like a lot of Berlin (including Unter den Linden) there is a lot of roadworks and building happening, and they're digging up sections of the road outside the apartment, and right down the street.


While we're talking about the attractions of the local area, we should report that there have been large police raids on an area a block or so away, for the last two evenings. This started on Thursday with lots of noisy blues and twos, passing through the Frankfurter Tor intersection and congregating a block north, where they sat in the street quietly for quite a while.  Then drove off.

Last night it happened again, but then escalated. LOTS of police wagons, including some huge black armour, and dozens of police in helmets (but no riot gear) appeared at our intersection at about 9 pm, blocking the whole four streets off eventually.  No sirens, just lights.  We'd just been out and hadn't seen anything, but peered up the road from our windows; couldn't see anything, but the 'action' seemed to be round the corner in Frankfurter Allee. 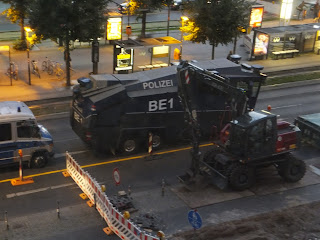 Apparently, from what we glean from the internet and google translations, there is an 'alternative housing scheme' (squats?) a block or so north east of us. They'd declared this a 'week of action' to celebrate 25 years there, and this turned into a street party with stalls, projection of a film on a house and a punk band on a balcony. Police moved in, allegedly heavy-handedly, stones were thrown, including from rooftops, some people injured, pepperspray used etc etc.  That was Thursday night. And Friday night was a protest demonstration about the police action.  All this from the local area's web-based information board of demonstrations.

But we didn't see much, and eventually it all cleared away and the traffic resumed its relentless flow.

But the sirens still go past ...


Very easy to use. We have an old map that someone left in the apartment, and some routes seem to have changed their name (U1 is now U12?) or details, but between U-bahn (subway) and M-trams ... and potentially buses, there's a detailed network that makes it easy to get round the city. There's good signage everywhere and easy correspondences. 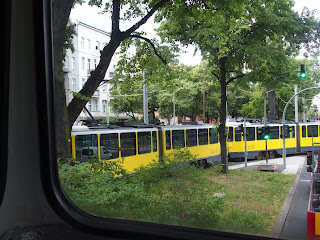 We tossed up about a weekly or a series of daily tickets, and decided it was a little cheaper to buy daily tickets (you can also buy single journey tickets, but three trips makes a daily less expensive) - which was wise as we really only went out on three days. Buy tickets at machines on the U-bahn platforms or on trams (also from bus drivers?) and validate them once; there are no barriers, so it is a very open and honesty-based system, backed up apparently by inspectors, though we've not seen anyone or been asked.

Out only confusion was emerging from the U-bahn in the vast Alexanderplatz downtown and trying to work out which way was north etc, and which way we wanted to go.


We did our usually orientation tours. First we took a river tour, which was one hour up the Spee and back again - OK ... gave an insight on the major riverside buildings, but the commentary was sometimes overwhelmed by everyone chattering. Garry advised the existence of a longer canal tour, but we never found out where that went from. Then we did one of those open-top bus tours - hop on, hop off.  We hopped on and stayed for most of the 2 hours. It ranged more widely and enabled us to glimpse the major historical sites without getting bogged down in the crowds around the Brandenburg Gate or at Checkpoint Charlie (the latter of which seems OTT tourism). 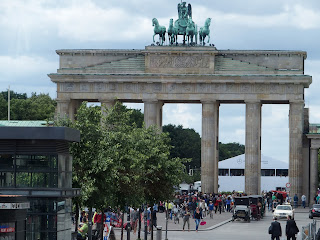 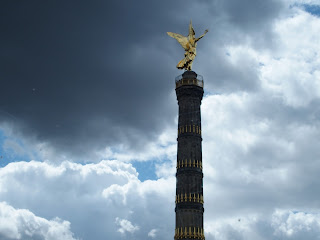 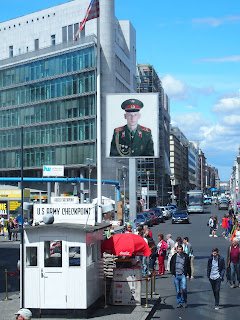 I suppose the overall impression is about the amount of destruction during the war, and the amount of rebuilding that has happened - and is still happening. It was hard to get a sense of the overall structure of the city or 'flow' of it all - it was  series of disconnected locations. But maybe we need to work on it more, if we had more time.


That sense of disconnection continued in our time on Museum Island. We headed in and queued in the late morning for tickets to all the museums, and finished up visiting the Pergamon and Neues Museums before fatiguing out. We enjoyed what we saw; the Babylonian and Turkish displays were stunning 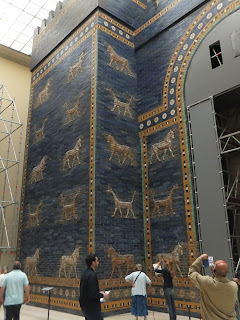 and we were delighted to find an area devoted to the Hittites and Hattusas ... proudly saying: "we've been there!" 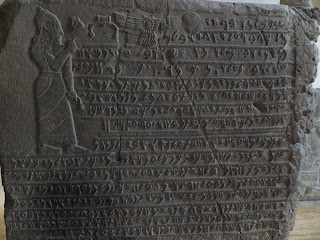 The bust of Nefertiti was also lovely in the Neues. We hunted in vain for Mithraic references.

However, we realised that the connection through these museums wasn't with the historical flow, but was an account of German archaeology. So the displays had more to do with who discovered and excavated sites (and removed them here) than about the civilisations. Is that being unfair?  And then we also realised that many of the displays are substantial reproductions, constructed in the 1930s; one water basin, for example, which looks old and intact ... but the commentary talks about how very little of it was found, and this is a reconstruction of it, based on those fragments. 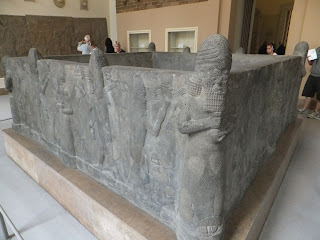 The Hittite carvings similarly, are plaster casts ... and we saw the originals in situ in Behremkale. Hmmm.  That then started us thinking about the nature of museum narratives ... and again the sense of disconnection...


We've enjoyed our time here. We've been weary at the end. Not sure whether that is belated jet lag, changes of weather, a slow-down after the festival, or just our preferred pattern of life.

It's been good just 'being here'. It's enabled us to catch up with the washing and get a broken tooth mended (quickly and cheaply in comparison with Australia).  It's given us a taste of another large city and of some of the life here. I think we'd return if there were specific reasons, but perhaps not as a 'city of choice' in its own right.

Roger
Posted by Roger Holdsworth at 09:48