We really warmed to Prague ... and that wasn't just the weather, which actually cooled slightly and even provided us with some rain. Rain on cobblestones in the night ... We were there for 5 nights, staying in an Airbnb apartment very central to everything. It was just across the river from the old city, on the edge of the Mala Strana or 'lesser quarter'; just down the steep hill from the world's biggest castle.  What's not to like?

So here are a few impressions, from the top, and a listing of what we did on our first occasion in the Czech Republic.

Into the Czech Republic


Driving out of Berlin was a little less fraught than driving in, though we did wander through some suburbs on account of roadworks. But eventually we got to a motorway and headed south. We broke the trip to have a look at Dresden and were highly impressed by the look of the centre of the city on the river. It was just a drop in and drive round occasion, but we thought this might be a city we'd like to spend more time in at some stage.

Crossing borders is hardly a noteworthy event in Europe now - and this was pretty much the case. The only question was one of paying the highway toll, which you do in the Czech Republic by purchasing a 'vignette' or little sticker, at the border. We'd read that you do this at any service station etc after the border, but just on the border was a specific stop where you queue to go in a converted shipping container and buy a 10-day vignette (there are other time periods available) for 310 Cz or 12 euros. You then fix this inside your car front window, after writing in the licence plate on it. And probably no-one ever looks at it again.

The highway then sweeps us on ... and suddenly ends, plunging us onto minor roads through villages (well, that was where Jane took us) until we rejoined a motorway south. Looking at a map, it appears that Jane has a literal mind for shortest routes and this cut off a corner. And so on to Prague, where we came in from the north, smoothly along the river and were suddenly at the apartment.


Alessandro's apartment is on the ground floor of the end block of older buildings fronting onto a park, right near the river, and across the main (non-tourist) bridge from the old city. Everything is literally in walking distance. It's a very comfortable apartment, with a large lounge/sitting room, a narrow bedroom, and a small kitchen and bathroom off the entrance hall.  Alessandro showed us round, provided us with a wealth of food, so that we didn't need to buy breakfast supplies, and showed us lots of information about the city and its transport. 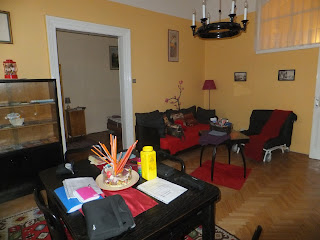 Trams 22, 20 and 18 leave from a stop just across a small park from the apartment; a metro stop is half a block away. The network of train, trams and buses means that the city is very accessible on a day or 3-day ticket (we finished up buying two separate one-day tickets from a small kiosk near the tram stop) and could just leap on and off anything. No barriers... 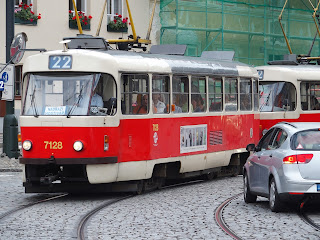 Prague has an old quarter, just across the bridge from us, a 'lesser quarter' on the same side of the river to us, a castle quarter at the top of the hill behind us, and a 'new town' surrounding all that. The famous Charles Bridge links the old quarter with Mala Strana. All the major sights were in walking distance from the apartment, but we did enjoy leaping on the trams (some of which are wonderfully old-world quaint) to take us up to the castle, or down to a restaurant.


To get a sense of the city, we wandered round on our first afternoon/evening, but also decided to take both a river cruise and, you guessed it, a little tourist train! There were HUGE crowds ... in fact, the most crowded of any city since, well, maybe India in 1988! There was a tendency to shuffle along, so breaking away in a boat or a toy train was a delight.  And they tell you things.

The boat was a small one. There are dozens of operators and touts in many locations around the river, with little boats and massive crowded ones. We chose one that went up the small canal off the river as well as looping round under the Charles Bridge and then further down stream. The company seemed to be staffed largely by young women, and the 'captain' we had was very engaging and bilingual. Lots of information and laughs; and she had some great photos of the river in flood, the river frozen over, the bridges washed away etc. 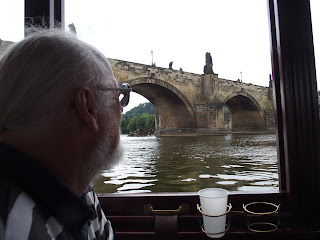 Later in the day we bumped into the tourist train in the old city's main square, so on an impulse leapt on and trundled and bumped over cobblestones for an hour ... up to the castle etc etc. Again, some information, but fairly minimal. 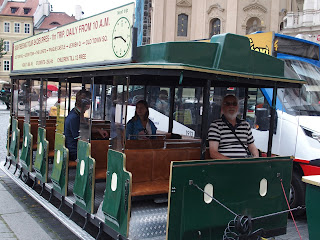 Some Things We Did


Being there was the important thing, so just wandering round the old streets, even in search of a meal, was the enticing thing. But our checklist tells us that we did do a few things during a fairly relaxing few days: 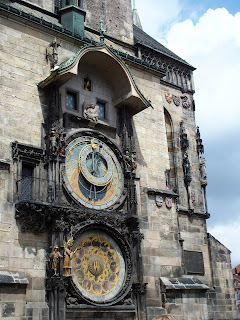 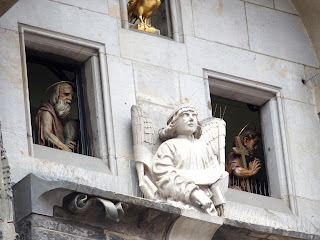 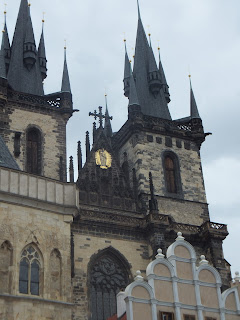 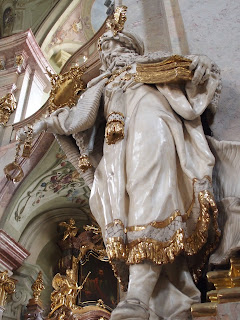 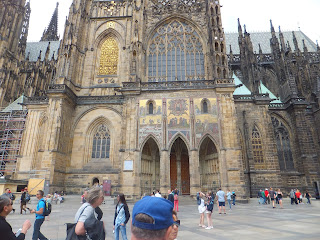 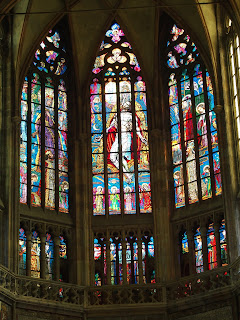 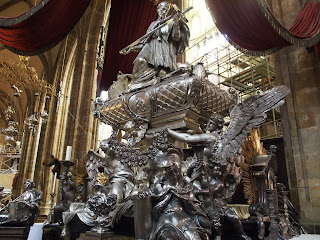 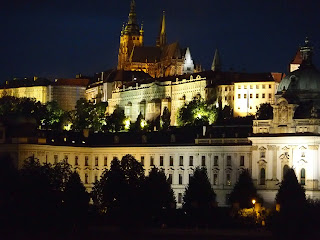 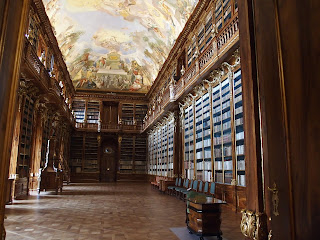 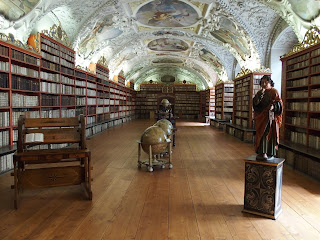 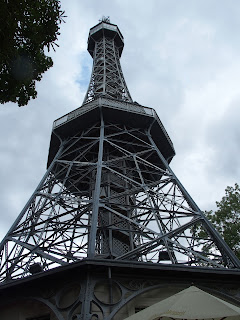 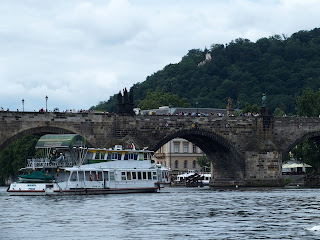 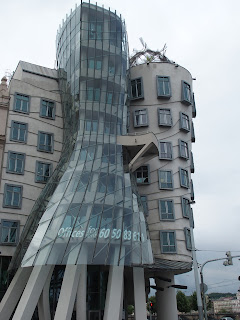 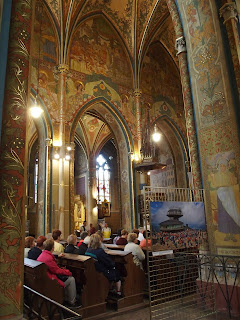 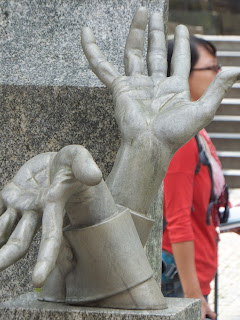 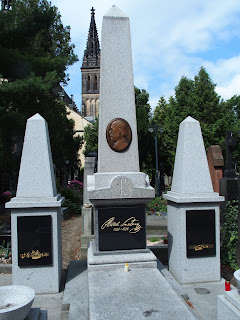 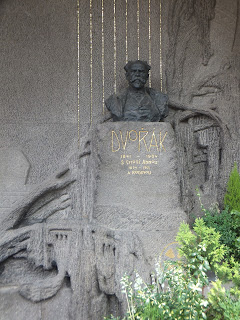 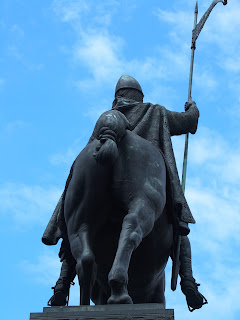 And one thing we didn't do: the tour of the Jewish quarter, synagogues and cemetery ... because the queues were massive.  So we peered at what we could from outside ... 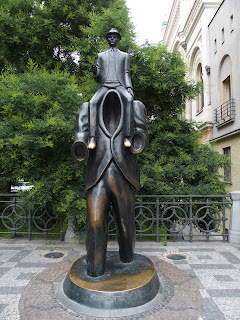 
There's no shortage of places to eat ... and every cuisine. We sampled traditional Czech fare (that seems to include lots of beer), but also found a reasonable Vietnamese restaurant, a noodle/dim-sum place and, on our final night, a great chilli restaurant in a basement, just opened for 4 months, with very good and relatively cheap food (Chilli Point - in the street with the covered market stall).

In the old city square was a free music festival, with Bill Laswell playing on our final night ... but we skipped that in favour of a slow and spicy meal. That's Prague for you!

Roger
Posted by Roger Holdsworth at 13:12