It was hard to get to Warsaw ... and even harder to leave.  That's got nothing to do with the attractions of the city; rather it's a direct consequence of traffic and road construction!

For a start, Jane (our occasionally trusty GPS voice) took us from Krakow, back via Katowice and the tollway. Somehow she decided that this would be faster than the direct road to Warsaw. Maybe it would have been, if it weren't for the roadworks going on and slowing us down. (However, it was probably faster than had we been coming from Katowice to Krakow, where that side of the tollway had been blocked by an accident, with a consequent multi-km tail-back, with people out of their cars and sitting on the median strip!)

But that was all nothing compared with the roadworks within Warsaw when we arrived there. The major roads into the city are all being built and rebuilt!  Where-ever Jane wanted to take us off the highway via an exit, that exit was now closed. We circled and circled. We got sick of Jane saying: "Where possible, turn around!" and decided to ignore her after she had us retracing similar circles for a while. But she then led us from our detours back into the same frustrating system. We crossed the river ... a couple of times ... and somehow, miraculously, discovered a way out of the roadworks and round some wooded areas, which deposited us into our suburb, just north of the old city.  Whew!  It took us at least half an hour extra to do all that.

(But that was nothing, as we'll see, with trying to LEAVE Warsaw.  We'll just note for the moment that Jane had us looping around closed exits from under-construction freeways for about an hour. We finally decided to ignore her totally, follow minuscule signs in Polish directing us to a possible destination in the general direction we wanted to go. It took two loops of that, missing one vital decision ... going right at a fork rather than left ... going round the whole system once again ... and eventually we were out ...

(But then we realised, along the road, that Jane was attempting to take us to Vilnius in Lithuania via the shortest route - through Belorus ... a country for which we didn't have visas, nor were allowed to take the car!  So we had to over-ride her again ... "turn around where possible" - sure Jane ... and get nabbed at the Belorus border?!!!)

Anyway, that's just the preamble and postamble to Warsaw.

We were staying just north of the old and new (i.e. 200 years newer) towns, just across the railway line, in an apartment in a gated community.  Our host was out of the country but had left keys with the guard ... and it was easy to access. Parking was free and in the street. The apartment was on the 4th floor of a modern block, with a lift ... luxury!!  It was a good sized space, very modern and well appointed.  Some scaffolding, as they seemed to be painting the building ... but this was coming down while we were there.

It was a bit of a walk into the old town, but not too bad ... and there were a few restaurants nearby, as well as a supermarket. We ate at one of the local restaurants, disturbed only by a 'concert' of improvised piano music from another nearby restaurant - which seemed to consist of random crashing of keys, in an attempt to persuade us that neither melody nor harmony nor rhythm nor tonality nor ... competence ... was required.  We shared bemusement with locals of all ages.

The next day we walked into the old city and picked up a conducted 'free' tour for a couple of hours. The young woman, Martina, was very engaging, telling us stories about the history of Warsaw ... in a vaguely chronological account, interrupted by some (hopefully) good-natured ribbing of Krakow.  She covered the founding of the city, good and bad kings, through to the Warsaw Ghetto and the Warsaw Uprising. We saw buildings, statues and commemorative plaques. 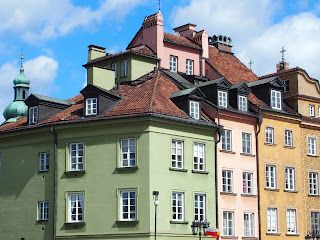 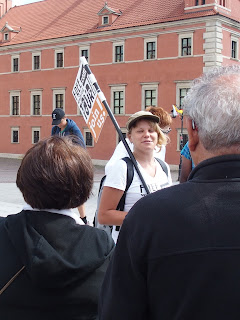 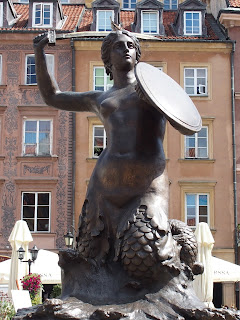 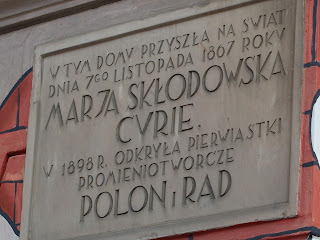 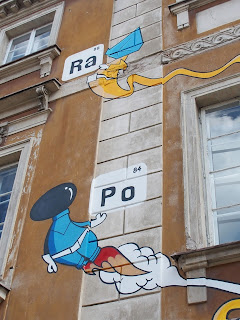 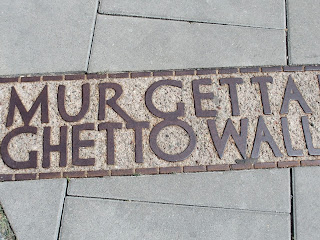 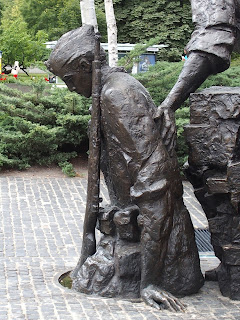 It was a useful way to see the city. At the end, as with these 'free' tours, we put some money (a tip) into a small bag ... and this became her 'pay'. Others are encouraged to, for example, write a review etc ... to contribute in any way they see fit.

Then later that day, we met up with Mateusz Dobrowolski from the local bands RUTA and (as manager) Warsaw Village Band. We had a pleasant chat and swapped some CDs. Since we were meeting further up in the Centrum area, this 'forced' us to take a tram each way (too far to walk easily) and enabled us to ride in one of the cute, narrow trams that run through the city and that we'd been admiring.

As we noted above, getting out of Warsaw was then the major challenge the next morning ... but we did ... and were on the way to Vilnius.

We liked Warsaw. Either there wasn't the mass tourism of Krakow, or the size of the city enabled the tourism to be absorbed more easily. Also, we reflected, the massive destruction of the city in WWII (85% destroyed, and 95% of the old city) meant that it has been rebuilt with conscious attention to reproducing styles and consistency. So the cityscapes in the old city are charming. On the other hand (and here we go with comparisons that Martina encouraged), Krakow was spared the destruction, so there there was a gradual erosion of styles as individual buildings were added, changed, demolished etc and this has meant that a more haphazard present is preserved ... as a city grows and changes naturally. So, for example, decisions have been made ages ago, and bit by bit, about adding buildings in the middle of a handsome square, that then break up the harmonious whole.

We only had a couple of nights in Warsaw, and traffic meant this was just one full day.  It probably deserves more. 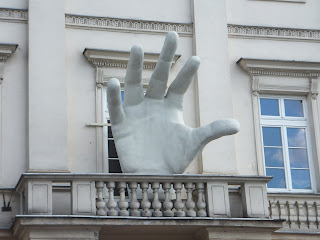 Posted by Roger Holdsworth at 06:15