Krakow greeted us with a downpour and some music.

We drove from Wrocław the slow way ... off the main motorway, through the smaller towns. But it was still quite a drive around the large industrial agglomeration of Katowice. Hot and humid as we dropped in and out of pursuing showers, where the temperature dropped briefly and then rocketed again as we left the rain.

But as we got to Krakow, we could see the clouds darkening over us. We drove into the old southern market square (Rynek Podgórski), contacted Beata our host, got the first bits of luggage into the apartment, and then the heavens opened and it poured.  Brilliant!

Once this cleared, we heard some singing outside, so went to investigate. A group of six young women were on the corner of our building, singing a cappella. It was beautiful and fascinating. Who were they?  Not a clue.  What language?  We'd assume Polish ... but it sounded more Bulgarian or Georgian. They sang a few numbers, embraced and left. There was no attempt to collect busking money. Was this specially to welcome us to Krakow?  We thought so. 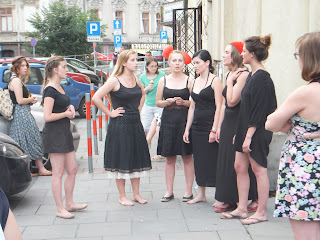 The old square is a little south of the main old town and the old Jewish quarter of Kazimierz, just across the Wisła River. The apartment is in a small building, looking out over the square to a church on one side, but  into the building's quiet courtyard on the other (where there is car parking via a very narrow gateway). The building was once the Deer Inn, evidenced by the sculpted figure of a double-bodied deer on its corner. 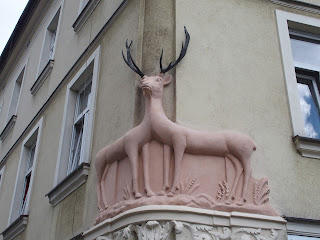 It's a lovely apartment with a large lounge room and bedroom, a small kitchen and bathroom between these, and an entrance hall from the courtyard balcony ... up two flights of stairs. 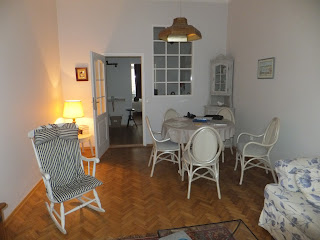 The area provided all we needed in terms of food, and we ate locally each night: Italian, Thai, Chinese, Polish... There's a 'temporary' display on boards in the square detailing its history, with photos and bilingual commentary.  This area was the gateway to the second Jewish Ghetto, where Jews were sent from Kazimierz prior to their removal to extermination camps. A chilling reminder, including a large-scale sculpture installation of larger-than-life chairs in another square just along the river. 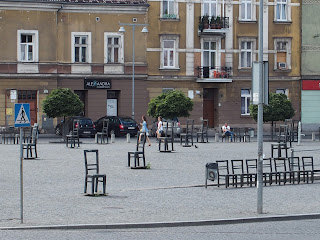 We walked across the foot and bicycle bridge into the old city ... it was a bit of a walk, but always fascinating.  In the days we were there, we did that walk a few times.  Initially we wandered past Wawel Castle and around the old town, admiring the huge old town square (the Rynek ... though again this was hugely interrupted by the building of the Cloth Hall in its centre) and hearing the interrupted bugle call from the Basilica Mariacka tower (interrupted in tribute to the original bugler copping an arrow in the throat). We tried to get to see the underground areas of the Rynek, but the first available timeslot was late that afternoon ... so we didn't.  We had a drink in the square, but had to hassle the owner into giving us our change ... she was just hoping we'd forget it. 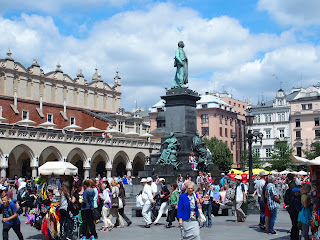 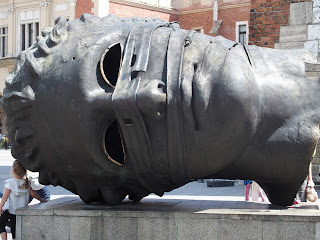 Instead we took the hop-on-hop-off bus around the town for an overall orientation. We were told in Wrocław that Krakow originated the small-scale golf-buggy tours, so there are several competing firms offering small 'personalised' tours. While these provide an 'intimacy' (though some are simply a smaller version of the pre-taped audio tour), they are also rather more expensive than the larger buses. However, the competition provided by them seems to have 'marginalised' the larger hop-on-hop-off buses (that are found in many cities), and the Krakow version was harder to find. We waited on a corner with no sign (where we'd been told by Turismo that it left from) and eventually it did turn up.  (It did mean we bought and ate a 'chimney cake' while waiting.) 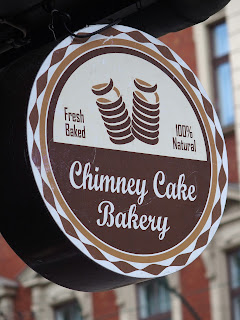 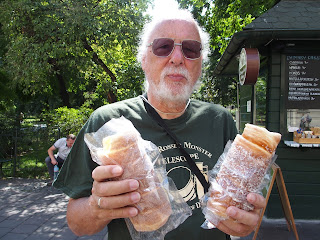 Maybe there's just one or two buses that make the hour plus loop, admittedly taking us to areas and sights we wouldn't have visited. It was OK. We cruised round in one go, finally getting off at Wawel Castle and heading 'home'. 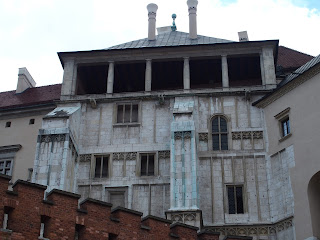 The next day we decided to go to the Salt Mine at Wieliczka. This meant walking into the city again to buy tickets (we were advised to do this here to avoid lines at the mine itself, though it turned out that these lines weren't that long for English-speaking tours) and then across the old city to the railway station to catch the train to Wieliczka, some 21 minutes south of Krakow (a more efficient and cheaper way of getting there than suburban bus or special minibus). Ticket machines at the station wouldn't work, so we queued at a window to buy the train tickets, with time running out to get a train that would enable us to be there in time for our time-designated tour ... and then some others in the queue were told that you didn't need to buy a ticket there, but could buy it on the train. Which turned out to be correct, and faster ... buying either from a correctly working machine on the train, or from the conductor. So away we went.

We'll write separately in this blog about the brilliant Salt Mine tour. Just let us say: do it!  It was a highlight of our visit to Krakow. 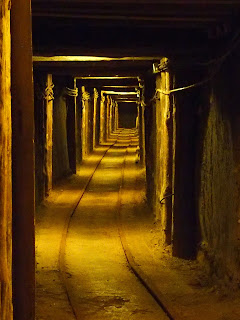 Coming back from Wieliczka, we were able to get off at the station previous to the Central station, on our side of the river, and a short walk from our apartment.

On our last day, we headed to Wawel Castle, on its mound next to the river, just south of the old city centre. We were definitely back into mass tourism here, with vast crowds heading up the two ramps to the Castle. Queues for tickets to the apartments etc stretched vast distances, so we decided not to bother, but look around the public courtyards, and the Castle Cathedral. 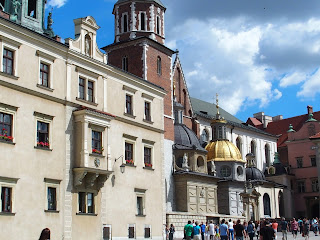 Finally, we wandered back into the city and again tried to book the Rynek Underground tour ... but everything was sold out for the day!  So we didn't get to see it.  But we headed to the Basilica Mariacka, where the ornate altar-piece is opened everyday at 11.50 am ... We just missed its opening (while queueing for the tickets) but did get to see it in its opened form. 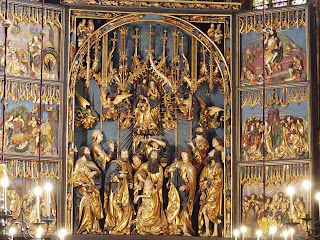 And then left the church in time to hear/see the bugler playing on the hour from the church tower and then waving his bugle at the large cheering crowd of tourists. 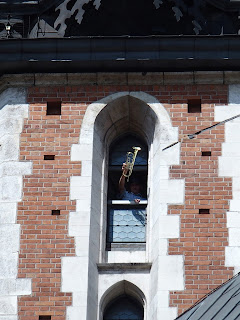 Then across the square again to the old University (Collegium Minus) where we waited in the courtyard, with its academic astrological clock: 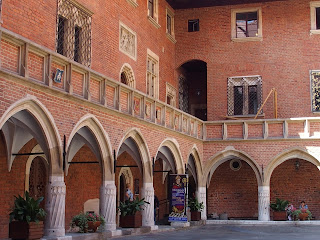 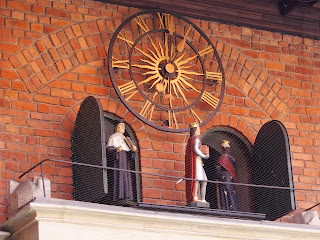 for a tour of the museum archives ... science and technology as it were, with long raves about Copernicus etc ... and some very funny, wry,  giggling commentaries from the guide. 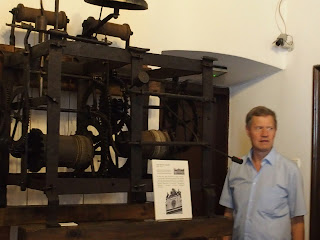 There were some wonderful things on display: astrolabes, telescopes, clocks and so on: 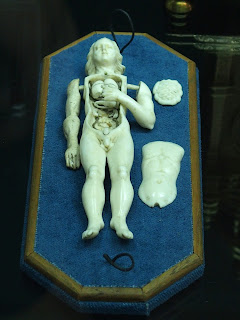 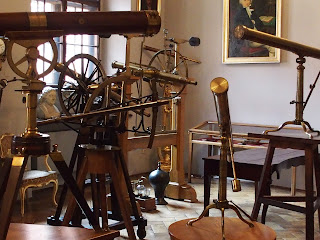 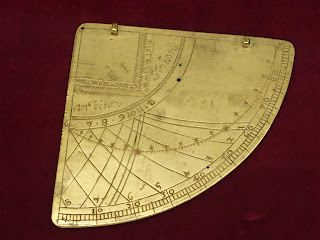 as well as the University's formal rooms (three levels: heaven upstairs where the professors lived; earth in the middle where everyone ate; hell downstairs where the classrooms were). 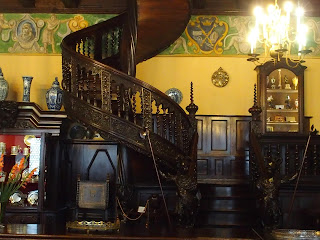 This tour left us with an appetite, so off to a quaint restaurant of the Writers and Artists Club, upstairs near the corner of the Rynek. 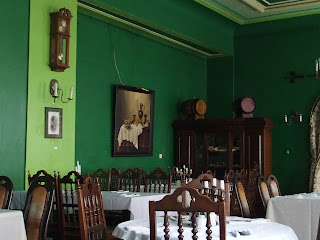 Overall, Krakow was interesting, more for the neighbourhood where we were located than for the major sites/sights, which were spoiled for us by the intensity of tourism. Apart from the Salt Mine, of course, which somehow absorbed vast numbers and provided us with a stand-out spectacle!  Read on.
Posted by Roger Holdsworth at 06:14