This was a very short stopover on the road from Trondheim to Oslo ... and hence will be a short blog entry...

We didn't want to do the long drive from Trondheim to Oslo in one day, so cast about (when planning) for something about half way in between.  And the Heidal Hotel came up, looking cute.

So we headed down the highway from Trondheim, the scenery becoming more mountainous, the gorges deeper and longer, and the rivers wilder. There was snow again on the peaks, in late summer - and the run-off rolled down in small and large waterfalls, finishing up contributing to the river in the valley we travelled along. 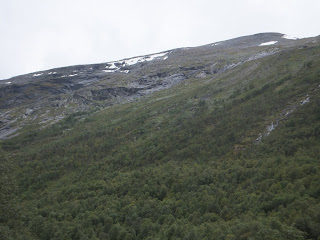 Part way down, we stopped in a ski town for lunch before pushing on and eventually leaving the main highway to follow another river, the Sjoa, off to the west. And this too surged and boiled with a large volume of fast water ... no wonder this is an area for white water rafting.

The Heidal Hotel appeared abruptly, right on the road, and with some 20 km left on Jane's projections. Hmmm.  Were we wrong, or was she?  A sign at the hotel said that check-in began at 4 pm so, with an hour to spare, we allowed Jane to lead us onwards - first to and through Heidal itself, some distance further up the valley, and then on a side road ... but then drew the line when she directed us up a dirt track. Where on earth did she think this hotel was?  An unsolved mystery. We turned round and trusted our own visual recognition skills.

The hotel is an old wooden building, recently (apparently) renovated (maybe still being renovated). It sits on the road, looking over and down the valley. The most dramatic photos show it surrounded by snow. We had it surrounded by mist and rain. 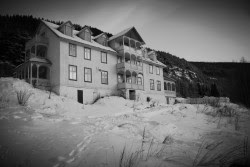 We had a very small and plain wooden room on the first floor, with a valley/river view. 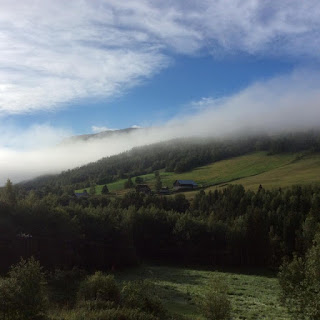 Initially there seemed to be only one other 'mature age' couple booked in, but another couple turned up after dinner (elk steak and elk patties!) and were given the room next to us ... out of 14 total available...  Thin walls is what we're saying here ... conversations clearly discernible ... but thankfully not going on into the small hours.  We slept.

Breakfast in the morning and check out and onwards. At this point Jane decided that the main highway to Oslo was blocked and unpassable and attempted to direct us further into the national parks to the west. This seemed unlikely, so we (again) over-rode her, returned some 20 km to the major highway and headed south. The 'unpassable blockages' turned out to be a couple of minor deviations around current roadworks. Jane has neither apologised nor, in fact, mentioned the whole incident again...
Posted by Roger Holdsworth at 12:15